William, "Bill" Welch is a native San Franciscan and Noe Valley resident. He attended Mission Dolores Elementary and Lowell High School. He was a Union Carpenter before his mother asked him to come into the family business, although he had been doing odd jobs for the funeral home since 1956. He was the managing funeral director from 1977 until 2016. He is available on request.

Steven is a native of the Mission District and fifth generation funeral director who has been working in the family funeral home since 1981.   A licensed Embalmer and Funeral Director since 1987. Steven lives within one mile of the funeral home and loves helping people. His training began at age 8 under the leadership of his grandmother, Letitia Duggan Welch. His education includes St. Vincent de Paul and St. Philip's grammar schools, St. Ignatius College Preparatory (1982), City College of SF, and San Francisco College of Mortuary Science (1985).

Steven is a Past President and Past Grand Secretary of the Young Men's Institute, past President of Kiwanis Club of Mission SF, Past President of Ancient Order of Hibernians County Board, Past Chairman of Comhaltas Ceoltiori Eireann, Past President of St. Philip the Apostle Parish Council, Past Camp Commander of Sons of Union Veterans of the Civil War, is a volunteer for Sea Scouts and a member of the youth activities committee of SF Elks Lodge as well as a member of many organizations.

Vaughn has been a licensed Embalmer for over 40 years and licensed Funeral Director for over 25 years. A native of Grenada, he has been in San Francisco for 44 years.

Lyz is a native of the East Bay with family roots in Mexico. She attended and graduated from the accredited mortuary school, American River College in Sacramento, CA.

Fluent in both English and Spanish, Lyz is an experienced funeral arranger and counselor who specializes in work with many foreign consulates in aiding families repatriate their loved ones to their home country. She also completed her embalming apprenticeship under some of San Francisco's most experienced embalmers.

Gary has lived in San Francisco for over 30 years and has been in the industry for 18 years. Gary is an active member in church and the community. He is an ordained deacon at the COGIC St. James Cathedral of Faith.

Danielle is a licensed embalmer, funeral director and crematory manager and has been in the profession for 11 years.

Originally from Amador County, CA, Danielle attained a bachelor's degree in Kinesiology from CSUS and is a graduate of the Mortuary School at American River College.

Carlos Fernandez, EA is a graduate of St. John's University Peter J. Tobin College of Business in New York City and a member of the American Institute of CPAs, the California Society of CPAs, and the National Association of Enrolled Agents.

Carlos lives in San Francisco and is on the Advisory Board of St. Finn Barr Catholic School.

Megan is a fifth generation member of our funeral directing family. She supports the Manager and Funeral Directors to provide the best quality experience for our families. Her education includes St. Philip's grammar school, Roseville High School and earned her BS at University of Nevada at Reno. She lives in the Mission District.

Tessie, a native of Arkansas, has been our hairdresser and cosmetologist for over a ten years. She also assists the funeral directors on services and supervises visitations and Quiet Hours. 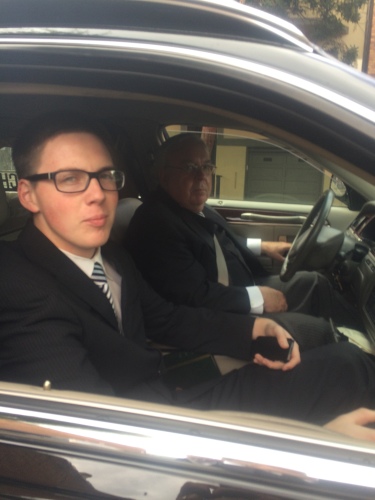 Assistant to the Directors

James is a member of the California Army Aviation National Guard.